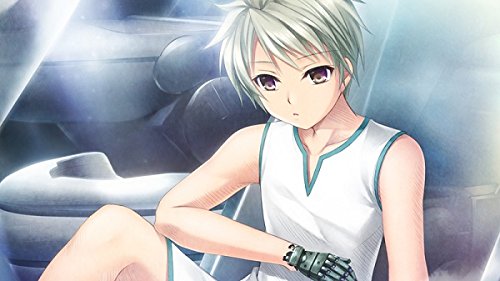 【First Press Limited Benefits】 1. First Time Limited Production Sanrikido Box 2. Harmonia Original Soundtrack 3. Harmonia Piano Arrange CD 4. Original Can Badge (10 cm × 10 cm) 5. Booklet with Writing Novel 6. Original Music Box (Eternal Star To Ver. Genre: Kinetic Novel Original picture: Higami Tadoru Scenario: Nakamura Tsuyoshi / Cape (C) VisualArt's / Key Supported OS: Windows Vista / 7/8/10 CPU: Core 2 Duo or higher (Core i 3 or higher recommended) Memory: 256 MB (512 MB or more recommended) HDD: 4 GB or more free space Graphics: 256MB Video Memory (with Pixel Shader 2.0) Required / 512MB Video Memory (with Pixel Shader 2.0) Recommended DirectX: DirectX 9.0 or later 【story】 A story of a distant future. In the big war, the earth was hurt big wounds. The atmosphere is dirty in gray, the budding of life is stopped in the earth, and the water is dry. And the population was decreasing more than the peak. The girls gathered to live the day. In such a period, a robot with emotional function called an emotional doll (philoid) woke up in a decayed facility. It is a humanoid robot with literally emotional function in the crystal of human science before war. As a new human partner, existence had been promised to make life better. However, the woken phyloid immediately notices himself of lack of emotional function. It would have been left in the middle of the production, the right hand was not covered with artificial skin and the skeleton of the machine was bare. Juvenile phyloid instinctively asked for Ningen. And keep on walking the devastated world to gain emotions that are missing to you. One day, a phyroid was picked up by a single girl. The girl carefully reminds him of himself as a human being. A small but warm city. Philoid boys gradually learn emotions in their lives with girls.
****You must be 18 years of age to purchase this item.**** Please beware that the item is from Japan (the language and text are in Japanese), then in case of PC Windows Game, the item requires Japanese version of OS to be played. OR please configure your computer to be able to use Japanese language. Please make sure if you can play it before purchasing the item.